Kanyakumari, aka Cape Comorin, is a lovely tourist destination famous for its many temples, beaches, and other scenic attractions. Kanyakumari has been inhabited for over 4000 years, as evident from the jars and other relics that probably belong to the megalithic or early historic period. Before becoming a part of Travancore State, it was ruled by several dynasties, including the Ays, Cheras, Cholas, and the Nayaks. These dynasties have influenced the city’s history, culture, and heritage. If you are planning on visiting some popular tourist places near Kanyakumari hotels, read on:

Kanyakumari derives its name from the presiding deity at the Bhagavathi Amman Temple. The goddess here is referred to as Virgin Princess and hence the name Kanyakumari. Legend has it that the Goddess Parvati undertook penance on one of the rocks in the Kanyakumari ocean. Besides the temple, Kanyakumari is famous for its sunset and sunrise, which can be viewed simultaneously on certain days of the month. Other attractions include Gandhi Memorial, Kamarajar Memorial, and Sunset Point. If you are planning to catch the sunrise or sunset, remember to plan ahead of time. This includes booking hotels near tourist places in Kanyakumari. Remember to check if the weather is too cloudy as it could affect visibility.

This reserve forest is one of the best tourist places near the Kanyakumari hotel. The path towards the jungle is dotted with rubber and clove plantations and thick forests. It is not an ideal destination for couples or those travelling alone. We suggest you travel in a group and ask the hotel concierge about a local driver who understands local routes. Kalikesam, being a reserve forest, has no buses or shops in and around the area. You’ll have to carry everything, including water and food, along with you. But once inside the forest area, you’ll be surprised by the beautiful streams and waterfalls that dot the forest. However, you’ll have to seek permission from the local forest officials before visiting the place.

Locally called Ganapathipuram Beach, this place attracts newlyweds and soon-to-be-married couples who come here for prewedding photoshoots. During weekends, families visit the beach with their kids and enjoy the beautiful scenery. Lemur Beach is around 12km from Nagercoil and is also famous for the estuary where waters from the Pechiparai Dam flow into the Arabian Sea. It is one of the best-unexplored places near hotels in Kanyakumari.

If you are looking for historical places near Kanyakumari hotels, don’t forget to visit the Padmanabhapuram Palace. This 500-year-old palace is the largest and perhaps the oldest wooden palace in the world. It was built by Raja Iravi Varma, one of the earliest Chera kings. The palace was restored later and dedicated to Lord Padmanabhaswamy by Raja Marthanda Varma. The location was strategically chosen thanks to the protection offered by the Velli Hills and the fertile lands and abundant water supply from the Valli river that flowed nearby. Besides the intricately carved wooden beams and pillars using the ancient science of Taccashastra, you will surely be surprised to learn about the gleaming floors in shades of brown, black, and black. The floor was made using natural ingredients like eggshells, lime, tender coconut water, oil, etc. 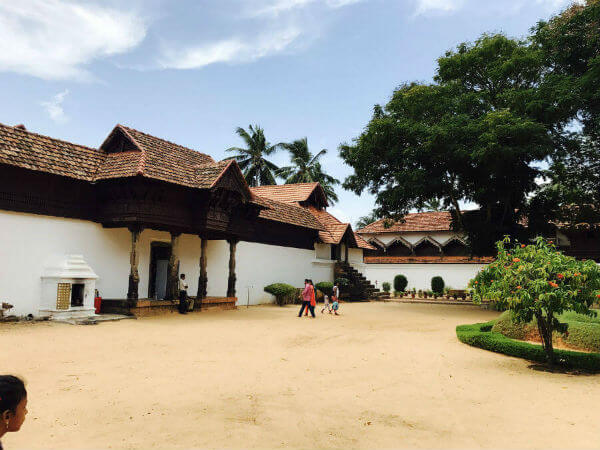 This is one of the very temples in the world dedicated to the Trinity of Brahma Vishnu and Mahesh. In fact, the presiding deity Stanumalayan – refers to Stanu or Shiva, Mal or Vishnu, and Ayan, meaning Brahma. It is one of the few temples popular among Shaivite and Vaishnavite pilgrims. Legend has it that Lord Indra visits the temple for the ardhajama pooja. The temple is also famous for its 22 feet Hanuman statue was supposedly carved from a single block of granite. Some of the other attractions in the temple include the musical pillars at the Alankara Mandapam and the Chenbagaraman Mandapam, which is filled with statues carved over 500 years ago.

Call us or speak to our customer service staff if you need a complete list of tourist places near Kanyakumari hotels. Here’s the link https://g.page/r/Cc0walvxFpQpEAE to reach us quickly and easily.