Being the southernmost part of the Indian peninsula, Kanyakumari is undeniably a hit among travelers around the world. There are plenty of best spiritual places near Kanyakumari hotels and explorers in and around the district. But that’s not alone – the place is known to have been inhabited since the neolithic times, i.e., roughly around 1500 to 2000 BC. It also finds mention in the Sangam literature by Sangam poets Marudan Illnaganar, Avvaiyar, and Oruchirai Periyanar.

Kanyakumari has a rich Christian and Muslim heritage as well. It is believed that the Chera King Cheraman Perumal converted to Islam in the presence of Prophet Muhammad and renamed himself Thajuddin. His son was responsible for building the Thiruvithamcode mosque. Similarly, Syed Bavakasim, who came from Baghdad to Kottar in the 8th century, also helped spread Islam in Kanyakumari.

As for Christianity, it is believed that St. Francis, who came to Kanyakumari in the 16th century, converted thousands of fishermen to Roman Catholicism. However, the first church in Kanyakumari was built as long as 63 AD by St. Thomas, the Apostle in Thiruvithamcode. Today, the St. Mary’s Orthodox Church or the Thomayar Kovil is considered one of the oldest church structures in the world. The cross in this church is believed to have been etched by St. Thomas himself. 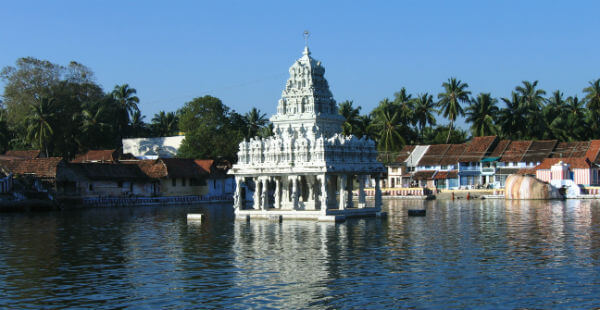 Some Popular Spiritual Places Near Kanyakumari Hotels Include:

The Thanumalayan or Sthanumalayan Temple is dedicated to the Trinity – Brahma, Vishnu, and Mahesh. This can be implied from the name, i.e., Stanu or shiva, Mal or Vishnu, and Aya, which stands for Brahma. There are records from the early Chola and Pandya periods – apparently, there are inscriptions of Early and Middle Chola rulers, including Kopparikesarivarman and Parantaka I.

The temple was later renovated in the 17th century and is famous for its sculptures, including the musical pillars and the 22 feet deity of Lord Hanuman.

Our Lady of Ransom Church

Our Lady of Ransom Church is dedicated to Mother Mary and is the most popular spiritual place in Kanyakumari among Christians. It is believed that when St. Francis Xavier visited Kanyakumari, he was pleased to see the grotto, which later became the Our Lady of Ransom Church. The locals combined the words Ransom and Delight and called their patron Alangara Upakara Matha. The church was rebuilt in 1900, with inspiration from ancient Gothic Art. The statue was imported from Italy and is clad in a saree.

Sai Baba Temple is another of the most visited spiritual places in Kanyakumari. This temple is situated at Potraiyadi and on the way towards Kanyakumari. It also has a Dwarkamai Dhuni, just as it is in Shirdi. Locals believe that you can get all your wishes fulfilled by donating a wooden log to the Dhuni. Also, on October 15th, when Sai Baba attained Samadhi, a stream of light falls on a stone (locally called Suryakanthi Kal) at precisely 12.00 noon.

If you are looking for spiritual places near hotels in Kanyakumari, visit The Gopinivas Grand Hotel. We promise a comfortable and convenient stay in Kanyakumari. Here’s the link https://g.page/r/Cc0walvxFpQpEAE to reach us quickly and easily.