The city and town of Kanyakumari get their name from the presiding deity at the Bhagavathi Amman Temple, Kanya Kumari, or Virgin Goddess. It is also called Kumari Munai in Tamil, probably in reference to the triangular shape of the place. For centuries, Kanyakumari has been tolerant towards people from different religions, including Muslims, Jains, and Christians. We have some of India’s best temples and the oldest church structure. If you plan to visit us, read on to learn more about the different spiritual places near Kanyakumari hotels.

A visit to Kanyakumari is incomplete without visiting the three famous temples in the district, viz. the Bhagavathi Amman Temple, the Suchindrum Temple, and the Nagaraja Temple. Each of these temples has a unique history deeply rooted in the local culture and traditions.

The Bhagavathi Amman Temple is dedicated to Devi Kanya Kumari, also called Virgin Goddess. It is one of the 51 shakti peethams or places where a part of Sati’s body or a piece of her jewellery fell. The deity here is famous for her diamond nose ring, supposedly so bright that a ship once wrecked on one of the rocks. Therefore, the temple’s eastern gate is always locked, except on special occasions. 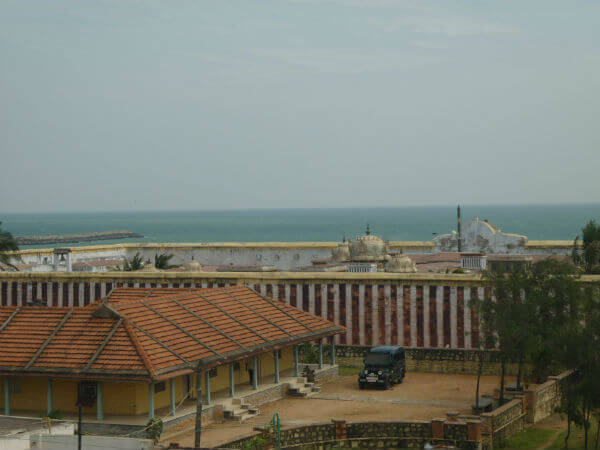 The Stanumalayan Temple in Suchindrum is one of the very few temples dedicated to the Trinity of Brahma, Vishnu, and Mahesh. It is one of the best spiritual places near hotels in Kanyakumari. There are several legends associated with the temple, one being that Lord Indra was purified and hence the name Suchindram, with the word suchi meaning purity. Another legend relates to the Trinity testing Anusuya for her devotion towards her husband.

The Nagaraja Temple is dedicated to Nagaraja or the King of Serpents. The King of Kalakkadu supposedly built the temple after being cured of leprosy. During construction, the King dreamed of an instruction from the Nagaraja that he shall only have a thatched roof. To date, the western roof of the temple is thatched and replaced every year. Visiting the temple regularly helps one get rid of skin problems, sarpa dosha, and receive blessings for progeny.

Not many know that Jainism thrived in ancient Tamil Nadu for centuries. In fact, Nagercoil was an important centre for Jain pilgrimage. Archaeological evidence proves several Jain settlements in Kottar, Kurandi, and Chitharal. There’s also evidence to prove that the Nagaraja Temple was earlier a Jain temple dedicated to Parshavnath.

But the Chitharal Temple is probably the most famous of these temples. The Chitharal Rock Cut Temple is a cave with rock-cut statues of Tirthankaras and other deities that are well preserved and definitely worth visiting if you’d like to explore different spiritual places in Kanyakumari. The Thirunandikkarai Cave Temple is equally magnificent, with structures belonging to the 9th century A.D.

Oldest Church Structure in the World | Thomaiyar Kovil or Arapally

The St Mary’s Church in Thiruvithamcode is home to the world’s oldest existing church structure. The Thomaiyar Kovil is believed to have been built by St Thomas in 63 A.D. It is also called Arapalli, either in reference to its height or because it was built on land donated by a king, also called ara in Tamil.

To learn more about the different spiritual places in Kanyakumari, remember to seek help from our well-informed team.